Modification of old cars in Cuba

Watching Fast and Furious 8 is an amazing experience to bond me with Cuba. As a petrol head, illegal street racing scene in the movies can always touch my heart, while this time it blew my mind by showing 1949 Chevrolets Fleetlin race 1956 Ford Crown Victoria on the ramshackle, half ruined, but somehow beautiful main street of Havana, just as Pico Iyer wrote,”…in communist Cuba you will find shortages of everything except ironies.”, And made me grasp the chance to Cuba in the last second. Back to the United States or any other country except Cuba, these mostly ’50s and ’60s classic American cars would be cream puffs, pampered darlings, something too precious to show the public. Here in Havana, however, they’re taxi cabs. Daily drivers. The livelihood and lifeblood of their ingenious owners. Fords, Buicks, and Plymouths. The occasional Cadillac, Studebaker or DeSoto, and everywhere, Chevrolets. 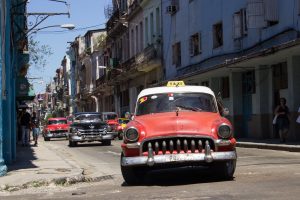 For me, these old classic antique American cars from the 1950s are a fascinating part of Cuba. “In 2011, the Cuban government legalized the purchase and sale of used post-1959 autos.”(BBC News, 2011) Besides, there are also some old Soviet cars too. “ Previously, the Soviet Union supplied Volgas, Moskvichs, and Ladas, as well as heavy trucks like the ZIL and the KrAZ. It is estimated that there are some 173,000 cars in Cuba.” (CARISTAS, 2011) When the time comes to the 20th-century Chinese cars are showing up too. “Since 2009, Cuba has imported sedans from Chinese automaker Geely to serve as police cars, taxis, and rental vehicles.”(CARISTAS, 2011)

However, in Cuba, the old American cars on the road today have “relatively high inefficiencies due in large part to the lack of modern technology.” (James and Marcus, 2006) This has resulted in increased fuel consumption as well as adding to the economic plight of its owners. Most of the cars need to be modified. Otherwise, there is no way they can be fully functional.

Wait a minute, is it true?

I just cannot believe my eyes when I watched Bob (the car owner’s English name) open the hood of his 1957 Cadillac in Jose Martin Memorial Square. If somebody tells you there is a car that can still run almost perfectly after 60 years, what is your reaction? If this guy adds there was no rebuilding or significant changes on the combustion engine, what are you going to say about it? My answer is opening my mouth too much time to feel my mouth anymore. 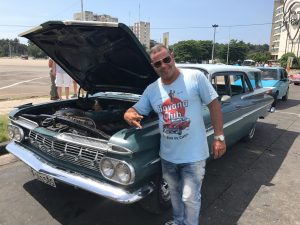 I was floored. It’s unbelievable.

The only thing Bob did under the hood was changing electronic starter and strengthening the pulley drive by using new material. This modification realizes the new Line-8-engine-assembly drive stapler and ensures the stapling strength and quality by converting the rotation of drive belt pulley into the plane curve movement of the pivot bolt. Due to the limitedness of the age, this Lined eight cylinders engine can only produce 100 horse powers. But it’s still good enough to drive its almost 3000 kilograms weight body across the city of Havana. “It’s the only one in Havana. And I don’t believe you can find the second one in another part of Cuba.” Bob was extremely proud of his car while he talked about it “No one else in Cuba has an engine like this old and works this well. Mine is the only one. No rebuilding, no changes. They are allAmerican.”

I have to confess that I have more respect for the Cadillac engineers that designed and assembled this car 60 years ago. Which reminds me the Geely cars we can see all around Havana. Lots of their engines have to be repaired or rebuilt no more than ten years. Although this Chinese car manufactory came to Cuba with big ambition, the quality difference can tell lots of stories in silence. Bob told me the secret of keeping this car so good in the past 60 years was “Driving like my grandmother.” 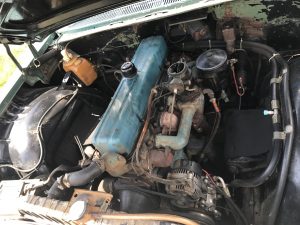 Without a doubt, driving slow is a perfect solution to protect a car, especially an antique car. However, the amazing manufacturing quality control and manufacturing excellence of Cadillac had a louder voice. Back60 years, a local American car manufacture already had rational product design, sophisticated production equipment, advanced manufacturing processes and improved quality of the system. All of these maintain this grandpa’s car was running like a new one today. Cuba can fix and rebuild, China can make the same thing, but in the second level of quality, United States still makes the perfect work.

The parts they used to modify their old cars are various. To buy parts to make the engines work well on those cars, the owners have to choose some illegal way to import from all around the world through third countries. Ninety percent of the modifying cases in Cuba are about engine rebuilding or changing. I tried hard to find some chassis modification cases, but it always turned to a dead end.The engines from those old cars can not work forever. They need either to be rebuilt or replaced by modern ones. Most new vehicles came to Cuba from the United States until the 1960 United States embargo against Cuba ended both importations of cars and their parts. One of the secrets is rebuilding the engine, but it’s not that easy. I met a friendly driver, Evelio, who modified his 1955 Chevrolets with a plate intake to enhance air inflow efficiency. He rebuilt his eight 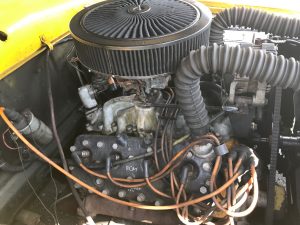 While the boring process is not difficult nor expensive if the cylinders are from last ten or fifteen years because all the procedures to achieve the goals are made base on modern industrial mass-production standard. However, these cylinders came from the 1950s and made by No.45 raw steel which is a heave and old material with high intensity. And the numbers of these cars and parts are insufficient. So the price to rebuild is high.

If it happened in the US or other mature marketing countries with perfect labor union system. Not China obviously, these rebuilding process is not expensive in China either. The Cuban government embargoed industrial products and tools, which means there is no chance for public to purchase cheap and mass-production items or tools to do mechanical works by themselves. And this also make the government monopolize the market.

To keep the intensity of iron qualified to found cylinder, the foundry processed heat treatment before shaping. During this process, a whole new cylinder was giving birth. It’s not a hard thing to do for a huge industrial country like US and China. And it’s also cheaper for the US or China’s manufactures to just build a new one than rebuilding the old one. Because when boring the cylinders, the old plungers and plunger rings were also needed to be changed because of the meet between plunger and cylinder changed after boring.

And this is only one step of rebuilding an engine. 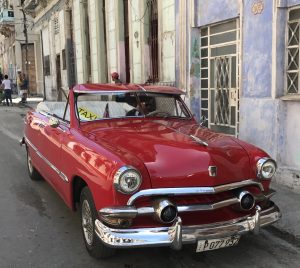 The other secret is changing parts of the engine, driving system and other transmission parts. Andy, standing next to his beautiful red 1959 Ford Costume convertible car, talked about his car and his story to me. He changed the original Ford build the gearbox with a second-hand Volks one, which impressed me so much that no one expected the original Ford gearbox could work for almost 40 years with few repairing time. That was incredible.

However, racing in Cuba is illegal, and they had to race at 2-3 o’clock in the morning and out of towns to avoid police chasing. The car was crashed once, and the engine and gearbox were

entirely broken as well as the two driving front axles. During 2010, Andy took the car from his father and modified it with a civilian motorcycle engine from Russia and second-hand civilian standard driving system from China.

Anyway, these parts cannot be imported directly from China, and they have to come through the third country illegally. Panama and United States (Miami) are always the first

choice for the third country. He changed this car to a Taxi, to a slow, smooth (hardly), spark, safe car just for carrying people around. The other thing changed with his car is his characters. Andy said he used to be party boy all the time and did work at all. Bit now he drives a slow big car like a boat, but he works very hard to build a better future for himself. 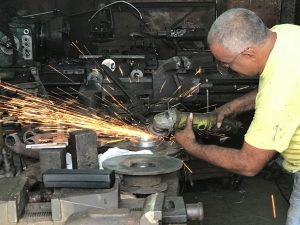 The classification of his skill by material is not professional as an engineer. But the reason I do this is that Ramon can only deal with steel. He has his lathe, an old turning-lathe, a stand-driller and a non-digital but whole functional working center in his private workshop. Welding tools as well. However, all these can only work with steel. Which means, he is an old-school traditional mechanic that cannot be capable of handling new cars with countless composite material body and aluminum structure parts, not mention the electric cells around the cars.

He fixed thousands of thousands of old American cars since he started work with his master at the factory. I’ve seen almost every 1950s cars in Havana even in Cuba. He did not like reading, but he did read some old American handbook that teaches people how to fix cars or use mechanical tools. He learned most of the skills by himself. Though he was trained by a Soviet factory and using former Soviet standard for most the time of his life, now he is using American standard to work to measure to fix things. When I asked him about Chinese influences in Cuba, including cars, parts, basic installations and so on. He said “I don’t like Geely (A Chinese car manufactory) Their engines are shit. But there are millions of Geely here. At least I can get cheap engine sometimes to use.”

Even the best mechanic in Havana can only deal with basic structure modification on the cars. And he can only deal with steel, not other materials. Precision instrument manufacturing needs massive investments from a government to establish integrated industrial system. To achieve this, decades of years of time is required as well as countless numbers of engineering students and technical workers with experiences. Without data, I can not say these are not happening in Cuba. But from my observation, modifications of old cars in Cuba are very primitive even sort of savage. Their “engineers” are hard to be defined as engineers based on the current modern technical conditions. 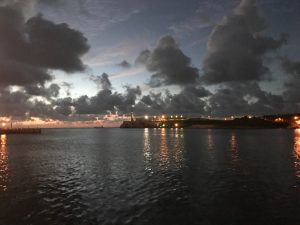 I’m Chinese, China and Cuba are two of the world’s last remaining socialist countries following the Marxist–Leninist ideology. I can find some familiar things and historical similarities between these two countries. These similarities are not limited to cars but also in social life, cultural experiences and civil life’s changing. China was another world before the great reform and opening which began in 1979.

Cuba is changing with big steps too. In the future, the fading color of old buildings may disappear; the ration tickets may become history; the taxi with 10 CUC starting price may vanish, but the sunset in Malecon will still be

intoxicating; the massive metal likeness of Che Guevara in Plaza de la Revolution will remain unmoved; the nonstop running cars full of people’s hope and lives will keep going in the next 60 years. On that moment, modification on cars will be all about electric motors. And I will be back again.