Ambulance Sellers: The Street Merchants of Havana
By Danielle Thompson

The congested streets of Old Havana are always filled to the brim with tourists gawking at old cars, locals getting around, and many overlooked yet hardworking people. A car built in the 1950s drives by, transporting seven people though it only seats four. After the smell of car exhaust from the 60-year-old car fades, the sound of a peanut vendor singing “Mani” (peanuts) and the smell of roasted peanuts is quickly followed by the sound of a bell and the sweet smell of sugary ice cream cones. A yard away, someone sells ice cream. A few feet behind them, someone else sells icy drinks.

This goes on for numerous blocks with all kinds of delicious foods and miscellaneous items; all for less than what it costs to park your car at a parking meter for two hours in America. This is one version of Cuban fast food.

These people are called ambulance sellers. The ones that I spoke with range in ages from 20-47 but many who I passed were older. They all have unique and diverse backgrounds but have all ended up with the same job that not many of them seem to enjoy.

In a crowd of attractive sugary snacks, Javier stands out as the one who sells a seemingly random but necessary item: onions. Javier is 31 years old and has been an ambulance seller for about eight years. He says that the reason that he works as an ambulance seller is because he didn’t go to school and he needed to work in order to maintain his family, which consists of five brothers. Being a seller doesn’t require a degree or higher education so it is the best job for him to support his family at the moment.

It may be hard to imagine an onion stand being popular, but within two minutes of discussion, he had a nonstop line of customers. This speaks to a separate issue of food insecurity in Havana. My translator, a native Cuban, said that they never know whether the grocery store will have what they need or run out; hence, the necessity to buy groceries when and where they can be found.

Javier also briefly disclosed that he has attempted to leave the country several times, which is illegal. He didn’t go into much detail but this demonstrates where he is in his life and how challenging his situation is at this time.

Down the street Orlando, a 47-year-old man who has been selling peanuts for five years, peddles his wares. Peanut sellers are one of the most common in Old Havana, however Orlando sets himself apart from the rest. He created a container that essentially works like an oven to keep the peanuts heated while he walks with them. Innovation and improvisation are both alive and well among the Cuban people.

Prior to becoming an ambulance seller, Orlando worked in a nickel factory. According to him, there was a big accident in the factory and after that, he needed a job that didn’t require much hard, manual labor. He says that he doesn’t love being a seller but he has four children and needs to support them. Despite how inexpensive peanuts are, 25 cents for 5 cones, luckily, he makes enough money per day to take care of his family.

Javier and Orlando have lived two completely different lives yet are in very similar places and happen to have a lot in common. They both have tumultuous pasts and the need to support their families, which has led them to their current occupations. Eddie, one of many who sells fruity ice drinks, is not much different than the two.

Eddie is 24 years old and works with his friend Sammy, who is also 24, running a juice stand. They’ve only been in business for one month. Their reasoning for beginning this work is similar to Javier and Orlando; they need money to support their families. Another thing that all of these sellers have in common is their lack of time. None of them had much time to talk as they were working quickly to make as many sales as possible. As stated, their products don’t cost much money at all so they need to sell as much as they can to make enough for the day.

A block away from Eddie, across the street from el Capitolio, is a dark little room in which cones of ice cream can be purchased for about 15 cents from a man named Daniel. He is 27 years old and contrary to the other gentleman, he doesn’t hate his job. He says that right now, it’s good for him.

Picking a suitable occupation is a universal challenge. Everyone wants a job that they enjoy that makes them enough money to support themselves; but, that’s clearly not always an option. While these people all have various reasons for beginning this line of work, one thing remains the same. They are all doing what they can to survive in a country whose economic freedom ranking is only 29.8/100 and repressed, according to the 2016 Index of Economic Freedom.

A majority of the Cuban people are employed by the government and receive about 400-700 CUP – Cuban Pesos – or 17-30 USD per month (2017 Economy of Cuba). They do receive free healthcare, education, and food subsidies but 400 CUP doesn’t go a very long way. Compare that to the US where people can make tens of thousands of dollars a month and up.

Not to get into a discussion on income inequality or the issues that go along with a capitalist government; that is simply to demonstrate that Cubans don’t have a lot of options when it comes to making money. It is very common for people like doctors to also work as waiters and taxi drivers in order to make money in CUCs – Cuban Convertible Pesos, like these ambulance sellers. The benefits of earning money in CUCs is that 1 CUC is equal to 25 CUPs.

Many of the customers that ambulance sellers cater to are non-native tourists who have to use CUCs. On the outside it may not seem so but their job is actually a strategic one despite the mundanity of it. This is why they are so common.

No matter their situations, whether it be five siblings or four children, all of these people are hard workers and should be admired. They are putting their feet to the ground and doing not what they want but what they need to for the greater good of their families. Javier is a great example for his siblings; he’s showing them selflessness when put in a position of responsibility. Orlando is showing his children how to pick themselves up and take care of themselves and their future families when faced with unexpected injury. Eddie and Sammy are learning teamwork and independence as they begin their venture as juice sellers. And, Daniel is lucky to have found a job that he is content with.

These are only a few of the sellers in Old Havana but every one of them has a unique background. They are more than hands that pour a drink or pass you peanuts. They are people with stories and feelings and reasons for being where they are.

Americans have a habit of dehumanizing food workers and treating them poorly. I’ve been a witness to this many times as well as on the receiving side of harsh words over a miniscule mistake. Americans also tend to look down on non-Americans. This is especially true today as the political climate continues to heat up and xenophobia rises. These are unfortunate facts of the world today.

One thing that can open the eyes, minds, and hearts of people is travelling. If you are ever lucky enough to find yourself in the crowded streets of Old Havana, do purchase from ambulance sellers and tip well. Paying 1 CUC for a 15 cent drink is insignificant for an American but means a lot to a Cuban who has to go home and feed their children. 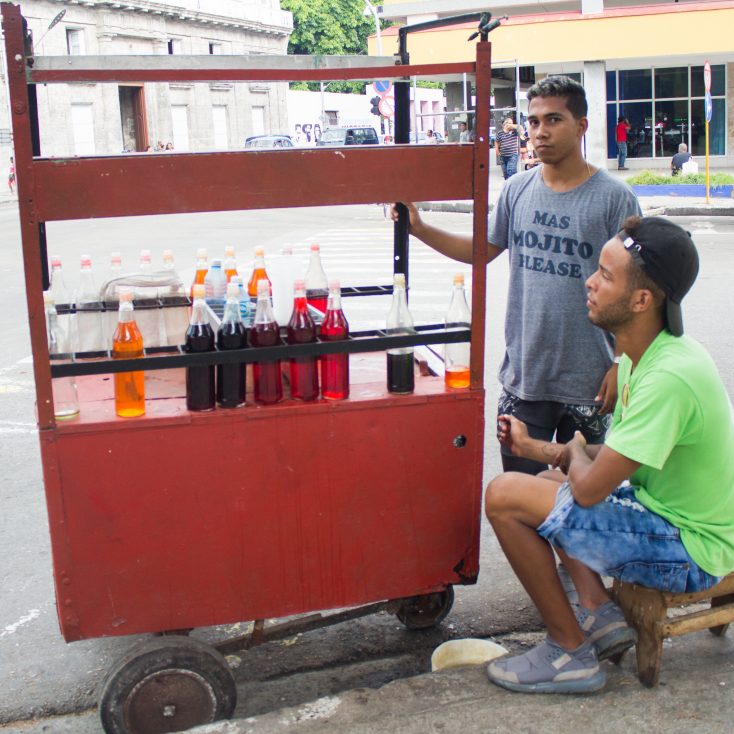 Eddie and Sammy wait at their drink cart for customers. 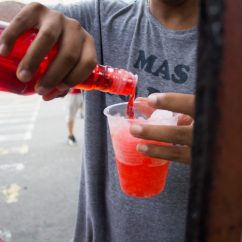 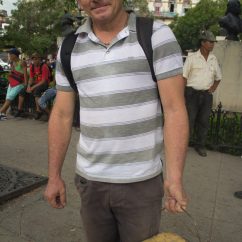 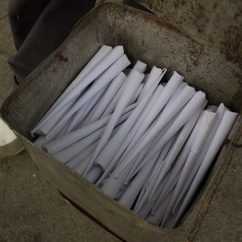 The handmade container used by Orlando to sell cones of peanuts. 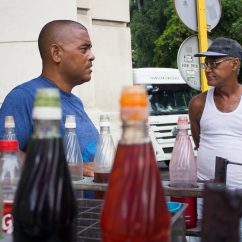 Two gentleman talk with each other as they wait for more customers to purchase their drinks. 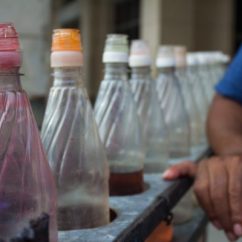 These are the worn glasses that drink sellers carry the sweet syrup in. 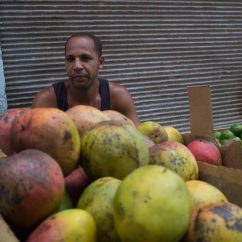 A man watches the mangoes as his partner looks out for customers. 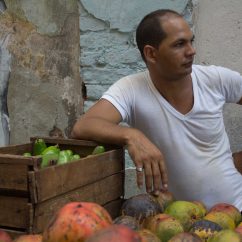 A man looks out for customers ready to buy fresh mangoes. 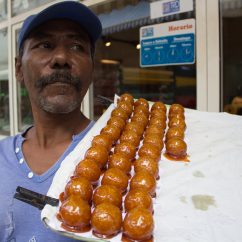 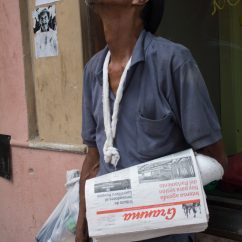 A man selling newspapers looks uneasily at the sky as it begins to rain.