Cuba is an island known for baseball passion and talent. Some of the best players in the world reside there, yet they can’t legally play in the United States due to the current Embargo Act. The Cuban talent must make a difficult decision of whether or not to defect, which means they leave the island illegally and gain citizenship in another country other than the U.S. This allows them access to be legally paid by Major League Baseball once they arrive in the U.S.

Two friends and I embarked on a journey to Havana to get the firsthand knowledge and opinion about the subject from the locals. We are all lifelong fans of baseball and wish to see the best talent in the world all in one place. The current political situation between the countries is so unique and we knew that we only got to hear one side of the argument if we didn’t make this trip.

This documentary investigates the Cuban side of the defection problem. We also wanted to understand how Cubans develop such tremendous talent despite not having many of the resources that other countries have. The journey turned out much different than we expected and opened our eyes to the opposite side of the spectrum.

The national Cuban sports broadcaster, Andy Luis Cerdá, met with us and found the best local ballparks to watch and discuss baseball with locals. His eagerness to discuss baseball encapsulated how most Cubans feel about the game. They can’t get enough of it. This was evident at every stop we made, from Parque Central to Estados Latinosamericanos.

Some locations wouldn’t allow video or photos to be taken due to the nature of our film. The political climate is quite sensitive and many people were hesitant to speak on certain topics. There was never any hint of danger, but we had still never encountered anything like that while filming before. Nevertheless, we found several vocal people that elaborated on the current situation and how it can change going forward. There were many people waiting to be heard, it is just a matter of giving them a platform to tell their stories.

The relationship between the two countries isn’t completely closed off. We encountered an American traveling baseball team that came to Cuba to test themselves against the local talent. The differences in the teams was evident just by looking at the amount of equipment they brought. The American players’ parents, many of whom grew up during the Cold War, got to see the beauty of a country that they had always been taught to view as evil.

This documentary ties together politics, baseball, and perseverance. The Cuban athletes endure daily blistering weather with limited resources. It doesn’t matter to them because of their passion for the game of baseball. The island of Cuba rallies around their national heroes, only to watch them leave for the opportunity at millions of dollars. The political relationship between the U.S. and Cuba is at a crossroads, and maybe baseball can help heal the current situation.

Everyone knows the Cubans passion for baseball runs deep in the entire country. We wanted to find a location where locals debate about the sport so we could ask them why baseball is so prominent in the country. We were pointed to Parque Central, a popular open plaza in the middle of Havana where locals convene to rest in the shade and converse.

When we visited Parque Central, there was a lot of activity bustling around us. Men and women were congregated in groups enjoying the weather and discussing whatever they pleased. There were Cuban and Dominican soldiers doing a ceremony in front of the Jose Marti status that overlooks the plaza.

The most distinct and boisterous group of people were in a circle passionately discussing baseball. We approached them with cameras and asked if they would like to be on camera and explain why they love the game so much. At first, they appeared hesitant to open up to us because of the cameras. But as one person broke the ice and gave us an interview, the rest of the Cubans eagerly lined up to speak. 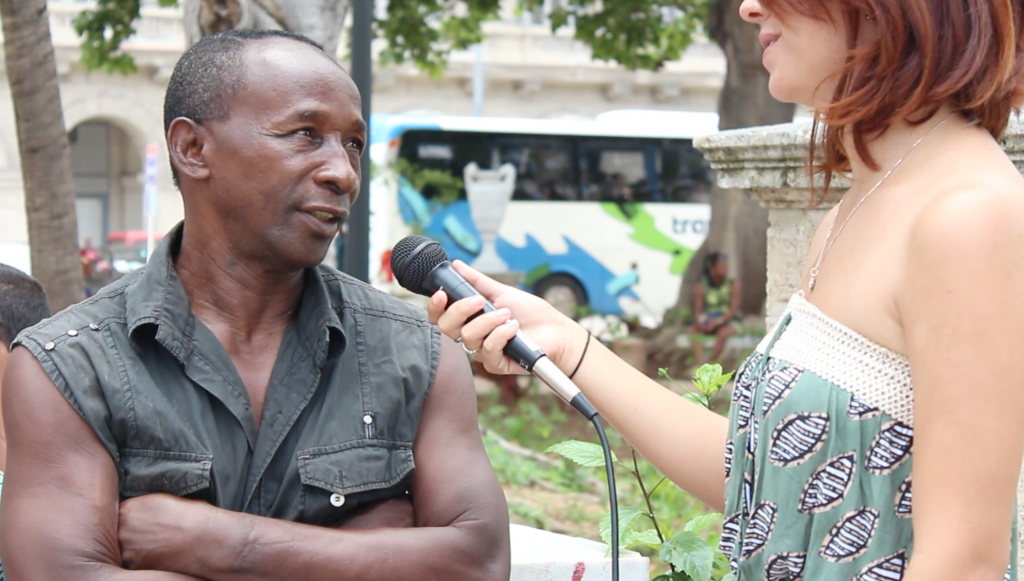 Cubans in Parque Central explain what baseball means for the country.

Our production team gave each individual a chance to make their opinion heard about the nation’s sport. The locals about their favorite players with admiration and knowledge. We told them to act as though they were speaking directly to their idols, and they spoke with such emotion that we could tell baseball is like religion to these people.

We weren’t sure how to ask them political questions about Cuban peloteros defecting to the United States, but they were more than happy to open up about their feelings on the matter. They all agreed that it was excellent for the homegrown talent to gain recognition and money by going to the U.S., but it makes them sad every time a player leaves them. 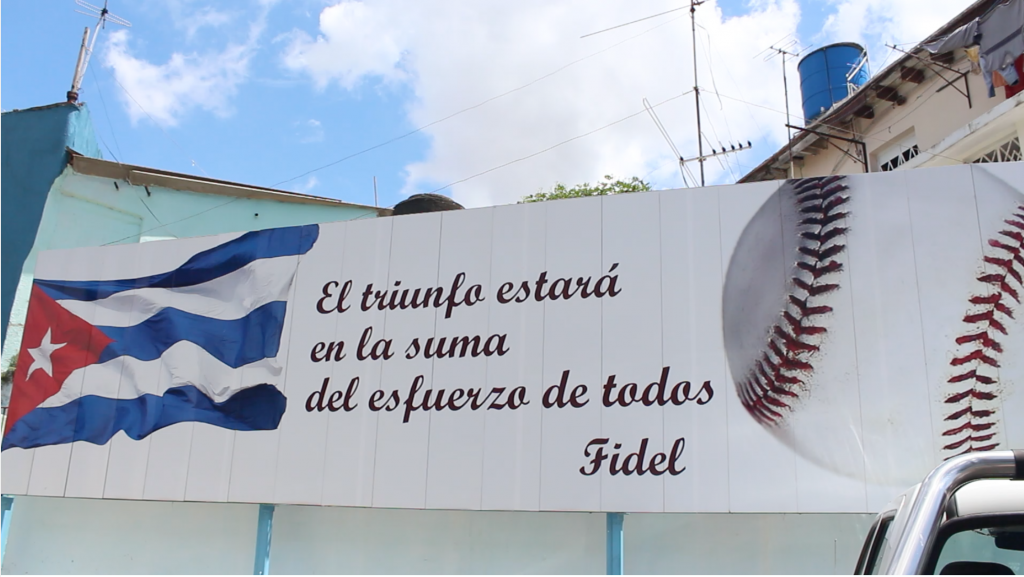 A Fidel Castro unification quote that uses baseball and the Cuban flag as a political mechanism.

It was an amazing experience to hear from the crazed fans first-hand about baseball’s power to bring people together. While the Cuban people all had differentiating opinions about what is the most important aspect of baseball, one thing was clear: Everyone feels a unique emotional attachment to the game that they love.