Daisy Ortiz is a Communication and Spanish major who studied abroad in Havana, Cuba for summer 2017.  Her Spanish skills acquired by studying abroad in both Spain and Cuba have led her to working as the Spanish editor at the school newspaper, The Pioneer. She hopes to expand in journalism or TV broadcasting in the near future at a Spanish outlet. 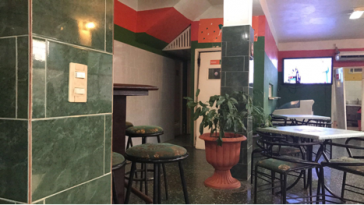 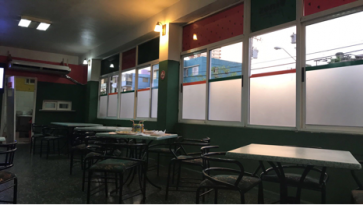 Havana is a mix between grey and white. I say grey because unfortunately for some and a blessing for others, even the best parts of Havana aren’t what you would see in the United States. Many of the hotels are built in the middle of run-down buildings in which people still live in. Some businesses don’t even have the supplies to keep up.

When looking for a decent place to grab a meal my friend and I ran in to a small business called Dinos Olokku Pizza which seemed fine from the outside. Walking in we saw about eight tables that seated each about four people. It was a very tiny establishment but after looking over the menu and seeing they at least had pizza and sandwiches we figured this would suffice our hunger for the night.

While they played reggaetón music videos on a flat screen T.V. and even some American music the doors to the kitchen were off the hinges and so the staff had to lift them in order to get through. At one point both Kali and I debated how good of an idea it had been coming in. In the United States things are very controlled and you would have never seen an official restaurant in these conditions.

Cuba is a country that is highly controlled by the government and yet you find places like these that are very run down but functional and serve good food. Only a small pantry was visible in the establishment that stored minimal things such as rum, two kinds of chips and other one brand products. It really makes you think what the government is actually helping in.

Our food took about half an hour to come out even though there was only another small family of 3 eating and 3 other locals waiting for their food. It was definitely a joint for the locals, many others came in just to talk with the owners and staff but would leave shortly after. At no point, did we encounter another group of foreigners or a “Yuma” which is what Cubans call tourists.

Our under 4 CUC meal – which is equivalent to about 4 American dollars – was put over place mats and resulted to be a very satisfactory meal. I had a sandwich with cheese, ham and mustard which provided a kick. Kali had a Hawaiian pizza that had a much more airy and thicker crust than we are used to but just as good.

The next day I went back hoping for a sandwich to go but when I asked the lady she told me it wasn’t possible for me to get one because they were out of bread. I was shocked honestly because there went half of their menu.

The restaurant system here is still a bit unclear to us outsiders but there are two types: state run and private restaurants. The state run ones have menus regulated by the government and they can’t deviate from what is put on there. Both pay a lot of taxes to stay in business.

This place seemed to have been a private one because I would like to believe that a state run restaurant wouldn’t run out of basic needs such as bread for the good of the business. If the government is permitting this I wonder in what ways is it benefiting the people. 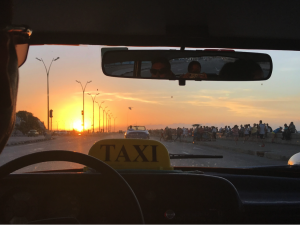 My parents always demanded that my siblings and I speak only Spanish in our household. We would learn English in school, so for the most part we followed their rule, not realizing how much it would pay back later.

When first arriving to Cuba, the language barrier wasn’t under my list of concerns. I knew the language and even though some words would be slightly different I knew I could figure it out. However, knowing Spanish proved to be helpful on my trip when I needed to get a taxi. Between my friends and me, I became the master negotiator.

Getting a cab is a simple task, but not knowing the language or how to negotiate can make the difference between getting charged ten CUC or five CUC, which equals about 10 or five American dollars. It didn’t take long for us to know what a good price to get to Old Havana was, and once I did, I did not budge from it.

Typically, I wanted to pay one to two CUC per person. Usually this is an easy task if we didn’t pick up the yellow cabs in front of the hotel.  We usually walk down to El Malecón, which is the seawall two blocks away to pick up a taxi. The ride would range from five to seven CUC.

Many times, I gave an offer and the taxi driver said yes or raised it. I preferred to start my number low so I could move up without hurting my wallet. Every time a taxi tried charging me 10 CUC, I made a face of shock, replied with a “no thank you” and walked away.

Then they would call me over and ask how much I am was willing to pay and we negotiated from there. A wink or slight smile here or there didn’t hurt the cause either. The cabs in front of the hotel, however, did not negotiate and acted like they were the only taxis around.

Knowing how to get around and for cheaply was crucial, especially as a college student. I couldn’t afford those extra $5 dollars every time we caught a ride; our hotel was not very close to many of the sites, so we depended a lot on public transportation.

Tourists are often at a disadvantage because they aren’t familiar with the area or average prices of things. However, knowing the language can be a major advantage and made my time in Cuba easier and cheaper.  I’m grateful that I was able to navigate Havana at a low cost. 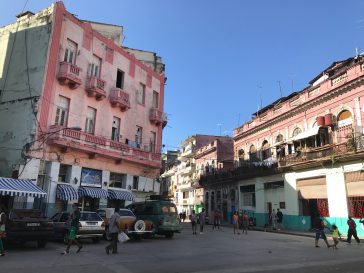 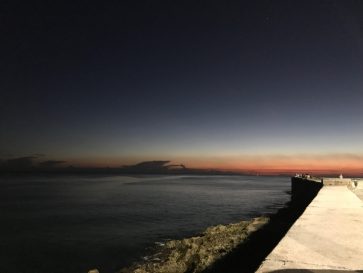 Two weeks ago, I was a travel enthusiast and a student who wanted to accumulate as many credits as possible in order to graduate next spring. The study abroad program in Cuba seemed like the perfect opportunity, especially for my communication major and because the program was journalism specific.

I was skeptical to embark on this journey because of the $5,500 cost, but like always, I said ‘whatever’ and jumped all in. I had very little expectations of Cuba; I really couldn’t begin to imagine how it was going to be, even after others said how heavily regulated it was by the government and how much poverty was there.

Cuba became a huge learning experience. Every walk I took down Havana’s small streets, every conversation with professionals working as taxi drivers or cleaning ladies and every observation I made led to learning something new.

I learned that the average taxi driver and cleaning lady make around 20 CUCs per month, which is equivalent to about $20 American. As an American, I couldn’t imagine living with such a tight budget. Personally, that amount alone goes toward my gas tank on a regular week.

Given the financial crisis, professionals choose to work in tourism, such as driving taxis or working in hotels, because they know they can make tips from tourists and often people leave behind shoes or other gifts which they very much appreciate.

It may seem like Cubans are living in extreme poverty and unhappy with their lifestyle and government, but being there I picked up a different vibe. People didn’t seem unhappy at all. Many of them always greeted me with a smile and a warm hello.

On weekend nights, many locals hang out at “El Malecón” – the seawall – drinking and dancing. They are many times in a joyous mood and take their time; the clock isn’t as important to them as it is in the United States.

Without a doubt, Cuba has its treasures. It’s a diamond in the rough, but a diamond nonetheless. It explodes in color, hospitality and relaxation. Life there is much less stressful than it is in the states. My experience has reminded me to be more patient, to appreciate the little things in life, and that I do not need material things to be happy. Clearly the Cubans don’t. And therefore, I say “Viva Cuba!“