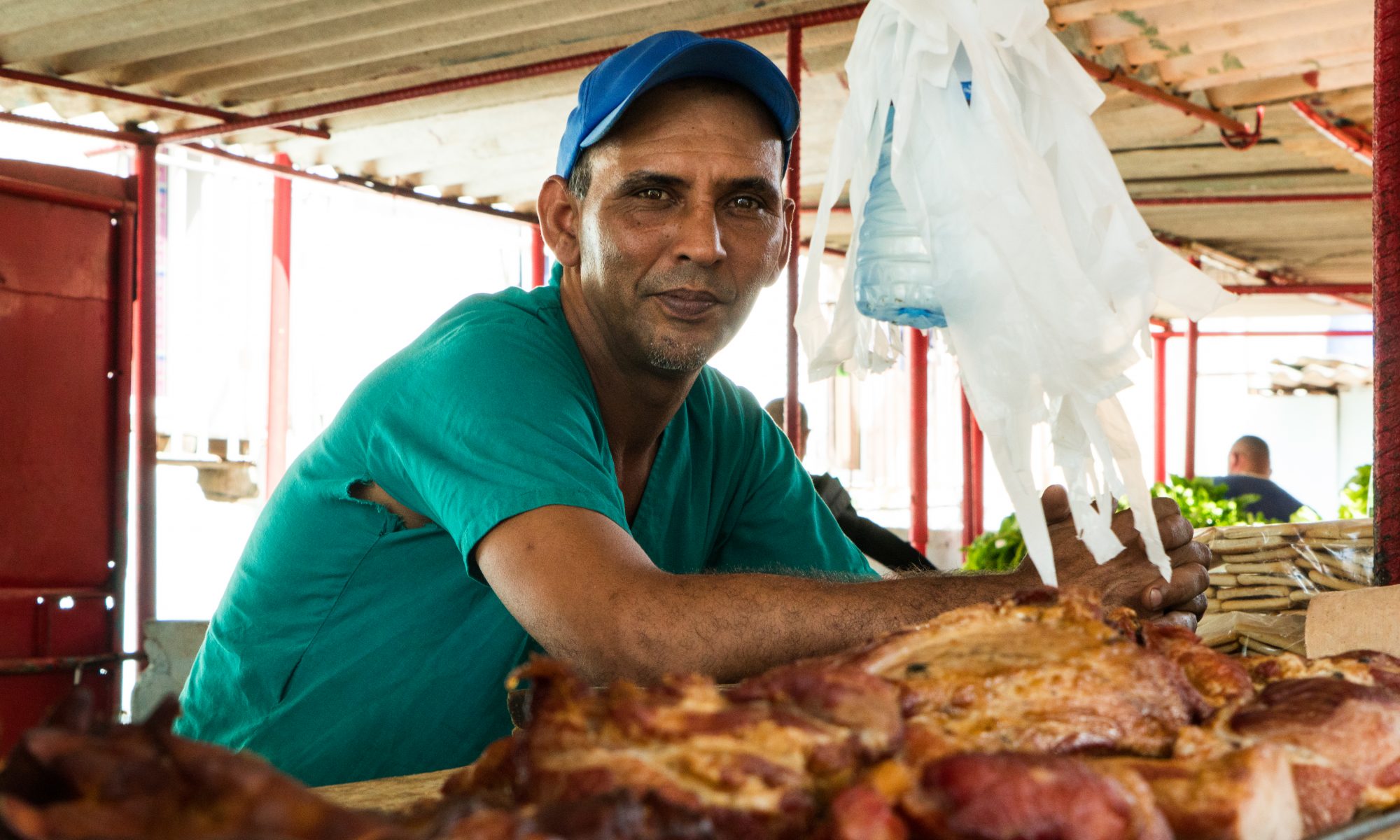 Insatiable: Cuba’s Food Ration System and the People of Cuba
By Alexandra Archuleta

The one and only man behind the counter is Juan Delgado; today is his 25th birthday.  From dawn to dusk he is working, handing out rationed groceries, and making marks in people’s ration books in the small government bodega just outside the lavish shops and elegant hotels of Parque Central in Havana Vieja.  Here in this impoverished barrio daily Cuban life crosses paths with history and culture in the form of La Libreta.

To the unsuspecting tourist, it is easy to pass the street that leads from Parque Central to this desolate market.  Signage on the front door marks the hours of operation, but nowhere is there a label that says this storefront is a bodega.  The lack of signage and low key presence makes you wonder if the bodega is a secret club for only those in the know, or a remnant of a bygone era that everyone would prefer to hide away from the eyes of outsiders.

“It’s not enough for any of us,” Delgado goes on to explain as he discusses the current rations provided by the Cuban Government, “no one can live off of just this.”

Cuban government-owned supermarkets, otherwise known as bodegas, have been controlled by the Cuban government since Fidel Castro implemented a rations system in 1962.  From Castro’s regime to present day, families have been required to bring their state-issued ration book, known as La Libreta, each time they make a trip to the grocery store.  Under the Cuban government, the food rationing system provides an allotted amount of food per household depending on age, gender, and health status of the people living in the house.

The last time modern society saw any type of food rationing was Europe’s wartime ration food books during World War II, but ration books continue to be a part of modern day life for many Cuban people even in 2017.

Each family’s libreta lists the name, gender, height, and birth dates of each family member living in the household.  Age and gender determines which foods you can have, although some Cuban people can even get a doctor to prescribe a special diet to receive additional rationed groceries for a short period of time.  Other exceptions like illness can allow a person to receive milk temporarily, and diabetes can allow for an exchange of fish instead of rationed chicken.

Today, the Cuban Government uses a budget of $1 billion to provide subsidized food to its citizens.  In decades earlier, the Soviet Union provided subsidies of $4-6 billion, but after the 1990s was strictly cut out due to economic reform.  With less funding, came tighter restrictions for la libreta.  What once was something that could provide a sensible livelihood for many families has turned into aid that can hardly feed families through half the days of the month.  Endorsers of the ration system claim that la libreta epitomizes the Cuban government’s commitment to public health and welfare.

Cuba’s La Libreta food rationing system passed its 50-year anniversary in 2013, with little sign of it ending anytime soon despite the death of Fidel Castro.  For 55 years and counting, Cubans have experienced food rations along with limited access to household goods, but have been thriving despite the trade embargo with the United States, and tight Cuban government restrictions.

Rice and Beans: Getting by on the bare necessities

Under Cuba’s la libreta food rationing system, foods are listed as a per person and monthly basis.

Allowances vary vastly and by season; however currently, la libreta allows citizens to receive the following:

Meat and fish products are distributed at separate markets and following a different rationale. Typically, the ration is about 2 pounds of chicken per person, per month.

It is to be noted that la libreta and the bodega is not the sole means for Cuban people to acquire goods, as there are other avenues such as a mercado libre or free market that sell goods available to purchase in the Cuban peso, along with government owned markets comparable to an American farmers’ market that sell fruits, vegetables, and other goods.

The Main Course: What does “La Libreta” mean to the people of Cuba?

Gilberto Alfonso is a merchant who sells a variety of cured meats at the 17 and G Street Market in Vedado, a neighborhood of Havana. Gilberto has been working as a merchant at the market for the past 14 years, however he has been selling cured meats specifically for the past 9 months after losing his job at the same market selling fruits and vegetables.  The market is entirely owned by the Cuban government; Gilberto leases his space by paying a tax in order to run his business.  He says he does not have a hard time acquiring his supplies for his business, and he is able to make a profit despite the tax and fees he has to pay to the government.

Despite Alfonso’s positive outlook, the reality is he has to drive pretty far outside the city of Havana to the countryside to pick up his supplies.  Many of the Cuban people have no hang ups with completing time consuming tasks.  It’s almost as if an essential part of Cuban culture allows people to get away with little to no productivity.  For Alfonso and other Cuban people, no task is too time consuming, nor is any line too long of a wait.  Simply being on this island gives anyone, local or tourist, a valid excuse to take life in at a slow pace.

“It gives us only about 10 days’ worth of food for the whole month,” Gilberto Alfonso said referring to the current rations the government has set in place for its people.

Juan Delgado* is a 25-year-old Havana local who spends his days running his neighborhood bodega just outside of Havana Vieja.  To the unsuspecting tourist, it is easy to pass the street that leads from Parque Central to this desolate market.  Signage on the front door marks the hours of operation, but nowhere is there a label that says this storefront is a bodega.

Upon walking into Juan’s bodega, you see empty shelves, and a large chalkboard on the wall with dates of when certain foods are going to be arriving. Behind the counter sit huge barrels filled with oil, rice, sugar, black beans, and more.  Atop the counter sits a funnel for pouring into shoppers’ recycled water bottles, and a scale to ensure appropriate allotments are distributed.

Juan is responsible for around 2-3 city blocks, or about 120 families. He is the only worker for this bodega, leaving him entirely responsible for receiving the exact allotment of food for its assigned residents for the month, rationing out the food, and keeping track of it all in a three-part seemingly antiquated bookkeeping system. There is a record of what is picked up in the resident’s libreta, in the shop’s book, and another book to show the government if necessary or requested.

Cuban-American photographer Roberto Salas can remember a time where la libreta was implemented to be a temporary solution to the shortage of food, medicine, and other supplies as U.S. economic sanctions changed. He talks recalls a time in history where households had multiple ration book systems, one for groceries that was much more wholesome than what we see in present day, one for clothing, and one for pharmaceutical goods.  Up until recent years, Salas recalls tobacco being covered as part of the rations.

Undoubtedly, Cuba’s la libreta food rationing system may come as a huge culture shock to Americans. So many of us are accommodated to this 24-hour access, 1-hour express delivery, order-ahead kind of lifestyle.  Unplugging from these deep-rooted comforts gave me a better sense of my socioeconomic privilege. Although the lived reality of some people who are underprivileged is unfathomable, researching the rationing system on a person-to-person level is intimate, difficult, and ultimately humbling.  Many Cuban people are still happy and make everything work despite their perceived hardships.

For someone coming from a capitalist economy, it can be quite easy to see misfortune in broken down buildings, people in tattered clothing, and mandatory food rations.  In looking further, and with an altered perspective, it is apparent that these buildings that have lived through a colorful history, people who smile no matter what kind of clothes are put on their backs, and aid from the government that doesn’t discriminate against income.

Juan Delgado closes his shop at the end of the day. He remembers a time where la libreta provided a stipend for a birthday cake when it was your birthday. Today, he will not receive a cake from the Cuban government. Rather, he will close up shop and enjoy a dinner at home with his family.

*Name has been changed to protect the identity of this individual.