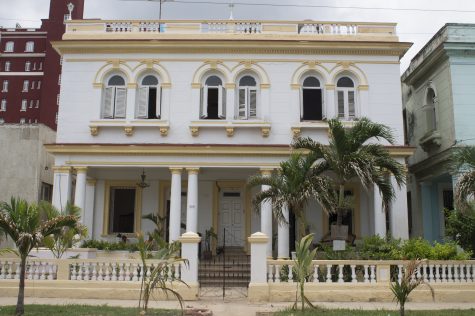 The most glamorous casa that was two blocks from the Malecón. Recently renovated, and painted yellow and white a little over two years ago.

Two blocks from Hotel Presidente, there were several particulars, ready to be rented out.

Master bedroom of a casa in Havana. 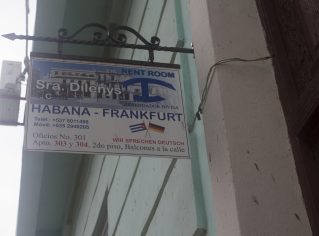 Blue casas are very common to come around, but there are owners that pay more to have more of a broad attraction to their signs, to welcome tourists. 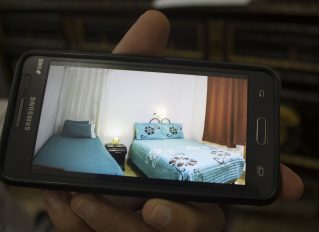 Ray Jr. was very open about talking about the process of starting his casa business, but he didn’t let anyone come take pictures. This was the closest I got to take pictures of his rental. 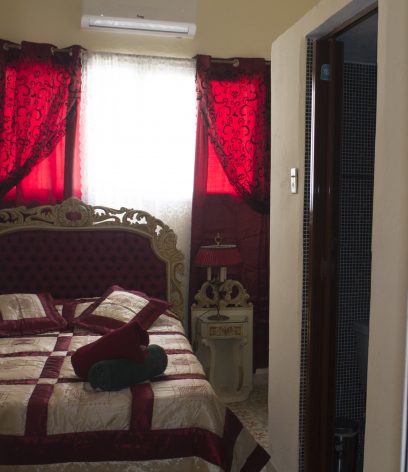 Casa particular sets up towels to store away for up coming guests. 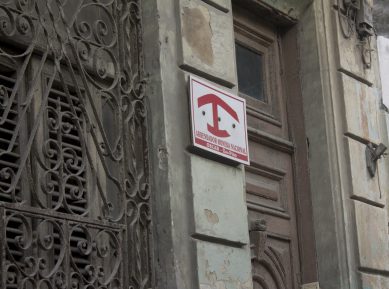 Red casas are hard to come by, but they are in more rural areas of downtown Havana. The red logo is only for Cubans who have residency and own their own cars. Very different from the typical blue casas. 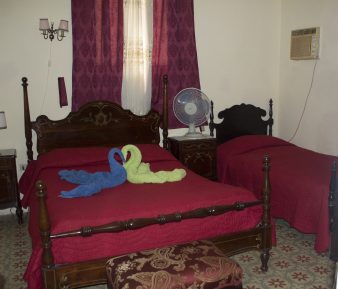 One of the main rental in a five-bedroom hostel. This is called the red room. Swans of different colors indicate this is also considered the honeymoon sweet. 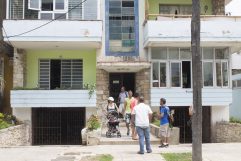 Tourists coming out of a casa particular in Central Havana around noon, going out and exploring what Havana has to offer. 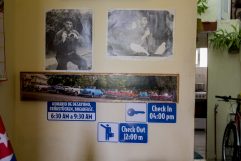 Inside a casa particular. When you walk in, tourists check in, just like you would in a hotel. 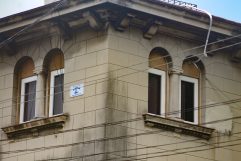 Photo taken of a house with the blue casa particular sign indicating, tourists are welcomed to stay here.

Walking down 7th street in Central Havana, on a hot 87-degree day, I stumbled upon a brightly colored house, which caught my attention. The cheerful yellow, and white crown molding invited me in. By the entrance there was a dark blue casa particular sign in the window. A group of Cubans were sitting outside the house playing dominos, waving their hands, telling us to come see their house. Walking into the house there was a set up anyone would image seeing when checking into a hotel, however it was more condensed. When you look straight you see a desk that says ‘check in, check out.’ When you turn slightly to the left, you see a modern American door tightly locked. One must wonder, what’s on the other side?

Casa particulars have been around since 1997, whereas in the United States, Air bnbs have only existed since 2007. The Cuban government finally allowed families to rent out their rooms to make another source of income while going through hard times. In Casa Particular Cuba, Carlos Rodriguez says, “Casas Particulares are basically Bed & Breakfasts but breakfast is not always offered and it usually comes at an extra price.” That extra price is usually between 5 and 10 CUCs. Considering most Air Bnb places in the United States don’t serve breakfast, in Cuba they really are charitable, especially when food is scarce. “Legally licensed casas can be identified by the blue Arrendador Divisa sign, which typically hang outside the home. These signs look like an upside-down anchor or a sideways “h.” There are also red Arrendador Divisa signs; however, these signify rooms that are only rented to Cubans and paid for in pesos (cubanpesos.com)

Casa Particulars in Spanish literally means “private home”. Interestingly enough, casas only allow you one room per guest, and only allows two people to stay together if they are married. Roberto Moranteis who owns his own Casa/ hostel says, “I really wanted to open my home due to the financial freedom.” He just got licenced to open his own place less than five years ago, and already made so much more money than he has his whole life. Its always freeing to hear, especially knowing that the average pay check Cubans get a month is about 20 CUCs ($20 USD). What makes his hostel stand out from his peers, is the fact that he knows how to make delicious Creole food. Roberto’s hostel, Hostal Loretta, located in central Havana, is a hot spot for college students.

Because internet in Cuba is still insufficient, 40% getting your rental acknowledged and viewed might not happen. Which in that scenario makes tourists wonder the streets to find a new place to stay. Its seems like its inconvenient to drag your luggage through 90-degree weather, When you walk inside, you’re instantly hit by blasting air conditioning and see a beautiful, welcoming environment. You almost forget the 90+-degree weather you had to trek through to get there. Kenia and her son Reinaldo use their house to rent out five rooms, which have different themes and room sizes. They base their price on what room you choose. The smallest room is 10 CUCs per day, and the master bedroom, is 40 CUCs per day. These prices are pretty high considering the fact most casas in Havana average from 15-35 CUCs. Each room has its own theme such as California, Cuba, Italy, London and Miami. Reinaldo also pointed out, that he re-configures the prices due to high and low seasons. High season is generally the Winter/Spring months (December – April) and Low Season is the hot/humid/hurricane summer and Fall months. He provides laundry for his guests, but the tourists have to buy the soap, which could be a challenge to find on the island.

Raymond Jr., is a Cuban native who has lived in his same house his entire life. To be involved in the casa business he worked about three different jobs with his wife to save money for renovations to fix his house, to make it sustainable for guests.  As well as working in construction since 17, he knew that fixing up his house would be an easy job. It took him a little of six months to fix his places. He started with the kitchen, the tackled on the bathroom, and installed air conditioning in the bedrooms. Since the Cuban government allowed the casa business Ray Jr., didn’t know what to expect when he put the Arrendador Divisa sign on his door. He didn’t speak English, but his wife Carmen did. With the combination of American clientele and his wife, he began learning English. He still struggles, but he says he wants to continue learning at 34 years old. “If you renovate, people will want to stay here. I also offer two free meals, and laundry”. Cubans are very friendly towards one another, so if a guest wants to come for a certain amount of time, and the rooms aren’t available, some of the owners will send tourists to their friend’s house.

In the United States, renting an Air Bnb is a more affordable than staying in an expensive hotel. The easy solution is to go on their website, and find a house that suits your needs. When you select the house, you first pay a deposit of $100 or less. Once they approve your request, on the day of arrival you get the keys, and then the house is yours. In Cuba, its different. When you want a more upscale place rather than finding one on the street you can go through two websites; havanacasaparticular.com or mycasaparticular.com. The two problems that tourists seem to face are the fact that there aren’t any reviews on these places, and sometimes your request doesn’t go through, due to the lack of internet. So, most of the time you have to base everything off pictures. Take a chance! Just go in person and see if its some place you and the rest of your party would like to stay in.

“A casa particular is difficult to own because its expensive,” says Raymond Jr., who has been offering his house since the introduction of casa particulars in 1997. He has to pay 49% in taxes. Most casa owners have to pay a huge monthly tax to rent out rooms, some having to pay 300 CUCs per month. Casa owners have to pay this tax no matter if they have guests or not.  “If a landlord rents out 2 bedrooms for 30cuc per night for an average of 300 nights per year, then the landlord is earning 18 000 CUC ($18 000 USD) per year” (Full Compass Guides). After taxes and fees, a landlord like this earns a net income of about $17 000 per year or more, putting them solidly into the upper middle-class category. This is equivalent of earning over $85,000 a year in the USA. With that it would be safe to say that Cubans are very rich when we renting out their house, even though the taxes scanty.

Cubans and Americans run their businesses completely differently. In the US if you run your own Air bnb, you don’t get taxed monthly or yearly. However, You get taxed on how long guests stay with you. Also included is the cleaning fee, which to many of us seems very inconvenient. However, the government has to make their money some how.

When visiting Cuba, tourists have two different options on where they would like to stay; a traditional hotel, which would be the obvious choice, or a casa particular, which would help you get a better experience when traveling to another country. With Cuba being an impoverished country, why not get some real Cuban culture and explore what great wonders a casa can offer you? Casa particulars have only been existent 1997, and since then many people Cubans have renovated Many natives running casas are great at giving out advice when it comes to places to eat and visit, and explore. In this low incomed state why not help out families in need that are giving their hearts to have people from all around the world come to visit.