The Indomitable Spirit of Brenda Brown
Homeless student persists with degree, looks toward graduation in June

As a budding journalist embarking on her second career, Brenda Brown, 55, is majoring in communication at Cal State East Bay and has worked at the student newspaper, The Pioneer. One of her more memorable stories last year covered the plight of Oakland’s homeless population.

She didn’t see it coming, but just two months later, Brown was homeless herself.

How she got there, and how she bounced back, is a story of grit and determination, as well as a lesson on the power of kindness of strangers.

“It was kind of ironic [that] it happened to me two months after doing the story,” Brown says.

But she’d known hard times for a while. In 2008, Brown lost her job in the great recession. “I had been working for a subcontractor for over eight years and got laid off in October of ’08,” she says. “I had never had trouble finding a job until then.” 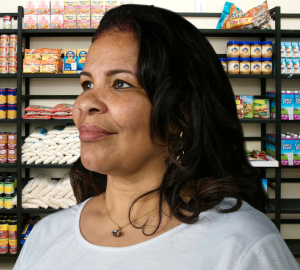 She then lost her apartment of five years, though was able to piece together living situations through friends and sublets, thinking employment and a return to stability were just around the corner.

But as the months stretched into years, she tried returning to her native Kansas to find a job, only to realize employment prospects were no better there.

“I came back [to the Bay Area] in August 2011 and lived on God’s grace and mercy through friends,” she says.

She also attended job trainings and workshops, and sent out hundreds of resumes. Finally, she vowed, “If I don’t have a job by January 2012, I’m going back to school.”

Once she started, first at Chabot Community College and then at Cal State East Bay, despite financial hardship and uncertain living conditions, Brown decided she wouldn’t take a minimum-wage job, as it would interfere with her studies for too low of a payout.

But with Bay Area rent at an all-time high, Brown continued to struggle to find a place to live.

“I was moving a lot,” she says. “I’m not as young as I used to be. I would rent a room, three months here, six months there. To rent rooms in people’s homes kept getting higher and higher until I couldn’t afford it anymore.”

She kept her expenses low by restricting her monthly bills to payments on a storage unit, a cell phone and insurance on her 1996 Saturn.

But come June 2016, it just wasn’t enough anymore. So, she decided to move into her car — the moment she realized, only weeks after having written the article for The Pioneer, that she, too, was homeless.

“I’m not as young as I used to be. I would rent a room, three months here, six months there.”

And it was at that point that Brown faced the biggest decision of all — to take one of those $10 an hour jobs, or continue working toward her degree, with just a few months left to go.

She wouldn’t give up.

Brown had maintained a membership at a 24 Hour Fitness, where she showered and used the parking lot to sleep. She organized her wardrobe in her trunk and downsized to a storage locker. She tapped into Starbucks’ Wi-Fi to do schoolwork. Once, she was startled by a security guard peering in her windows. She lacked privacy, and she lived in fear.

“I had some scary nights,” she says. “I was grateful I had a car and it wasn’t cold. There had been times in the past when I had utilized shelters, but this time, whenever I called, there was always a waitlist. They’re geared more toward women with children and families.”

Still, she was resolute in continuing with her education.

“I made the best of it,” Brown says. “As long as I could change, wash, brush my teeth and make it to school, that’s all I was really concerned with.”

She turned to writing about her own experiences in The Pioneer, and also began receiving support from Cal State East Bay’s newly formed H.O.P.E. program, which offers resources and community to homeless and food-insecure students.

“To me, Brenda is amazing,” says Alex Baker, program director for H.O.P.E. “She is a storybook of determination and progress, motivation. She’s been through so much, and even at her age, she’s never let circumstances hold her back.”

As it happened, when the California State University Office of the Chancellor released a study around the same time estimating one in 10 CSU students is homeless, KTVU tapped the university for a local story — and Baker immediately thought to suggest Brown to the TV station.

“I was floored when I saw the story,” Associate Professor and Department of Communications Chair Mary Cardaras says. “I just had no idea that this student — this woman who was in class every day and sitting in the front row — was going through all this.”

The publicity reached more than just the university community. Not long after it ran on television and online, the manager of the Clift Hotel in San Francisco, who was touched by Brown’s story, reached out to Baker and asked how he could help. Brown was offered a free luxurious room for a few weeks and an open-ended safe place to park her car.

“It was amazing to me,” Brown says. “It felt like rags to riches. I was very, very humbled, and very grateful.”

These days Brown has also found a more stable living situation, thanks to retired university employee Suzy Stidham and her husband Lee, who have given her their guest room while she finishes her final quarter and looks toward graduation in June.

Still, it’s another temporary situation, and Brown knows she needs to find work — and with it a place of her own. She’s been polishing her resume, looking for internships and dreaming of a position in communications with a sports team, ideally her beloved San Francisco 49ers.

“I know getting my degree doesn’t mean I’ll get my dream job,” Brown says. “Hopefully it will open a few doors.”

And she continues to tell her story, believing it can inspire others.

“I share my story because I know I’m not the only one who has had struggles and I want to encourage people to continue to persevere no matter what happens, and to know that no matter how bad [things] seem, it will pass.”