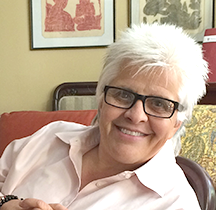 Dr. Cardaras is on the faculty at California State University, East Bay and is Chair of the Department of Communication.

She is producing a documentary about journalism, This Just In, and has curated and edited an anthology about documentary film, Documentary Film: An Insider’s Perspective published by Cognella in January 2016. Also, in post-production is a documentary short entitled Sunday Dinner, about the weekly gathering of a large Chinese family, a story “as American as apple pie.” Dr. Cardaras is the co-editor of a six volume anthology, The Cultural History of News, which will be published in 2019 by Bloomsbury Publishing of London. Three years ago, she published her first book, Fear, Power and Politics: The Recipe for War in Iraq after 9/11. She is helping to build and manage a new journalism curriculum and is hoping to develop a new bachelor’s degree program in Journalism for Social Justice. Dr. Cardaras is also hoping to launch College Newsnet International (CNI), a news network of student journalism from around the world, and is on the governing board of the Center for Sport and Social Justice (CSSJ) at California State University, East Bay.

She built the television, radio broadcasting, and digital film department at The New England Institute of Art in Brookline, Massachusetts and served as its chair for 13 years. She has been teaching college journalism courses since 1991 at universities including, LaSalle (Philadelphia), Syracuse (London campus) and at the American International University (Richmond, UK), Georgia State (Atlanta) and Northeastern (Boston). Dr. Cardaras free-lanced for CNN, Boston, and has worked for CNN, Atlanta, CNN and World Television News, London, and for numerous other news departments across the country in five other major markets spanning more than 30 years in journalism. Also, she has conducted media training workshops for students and professionals in the Arab world and in Vietnam. Dr. Cardaras is the recipient of two EMMY awards for excellence in spot news producing and feature producing and has been nominated numerous times during her career in journalism.

She served on the board of the Global Press Institute (San Francisco) as Vice President and served as both President and Vice President of the board of the Provincetown International Film Festival, (Provincetown, Massachusetts), which is home to the oldest art’s colony in America, and was its college and university liaison. She also served as Vice President of the board for the Boston Living Center, an organization that serves people with HIV/AIDS. She is a member of Society of Professional Journalists (SPJ), Association for Education in Journalism and Mass Communication (AEJMC), Radio and Television News Directors Association (RTNDA), National Gay & Lesbian Journalists Association (NLGJA), Pi Sigma Alpha, Political Science Honor Society Member, Journalism & Women’s Symposium (JAWS), American Political Science Association (APSA), Middle East Studies Association (MESA), and the College Media Association (CMA). She worked extensively with the Coolidge Corner Theatre Foundation in Brookline, Massachusetts, and the American Repertory Theatre at Harvard University about which she Executive Produced, Chaos and Order: Making American Theater. She has worked with the Sonoma International Film Festival and is a volunteer for the Sonoma Valley Mentoring Alliance. In addition, she is a SCUBA diver, an aspiring sailor, a curious, enthusiastic traveler, a lover and patron of the arts, and someone who believes passionately in the influence and necessity of responsible journalism all over the world.